Many different organizations have assisted with the startup and maintenance of the K9 Unit. During the difficult financial times K9 Units are usually cut first from a police department’s budget. Our initial startup costs were offset by both private and business donations. Each donor (no matter how small) to our program is recorded and updated with an annual newsletter on the K9 Unit’s progress and accomplishments from the previous year.

Even though every donor can’t be mentioned, we would like to point out a few who have stood by us since the beginning. They are Paige Chiropractic, Webster EMS, Ceppetelli Builders, JV Mechanical, and The Webster Animal Hospital. Their initial donations helped the department get the K9 Unit up and running.

The Police Department would also like to thank Webster EMS and their Chief, Gary Milliard for all of their support to our program. In addition to donating to our program, certain Webster EMS Paramedics have attended specialized K9 trauma training. In the unfortunate event a Webster K9 is seriously injured on duty Webster EMS has the training and skills to potentially save its life.

Ceppetelli Builders contributed a ballistic vest for our patrol K9. This piece of equipment can also potentially help save a K9’s life in the unfortunate event of a shooting. 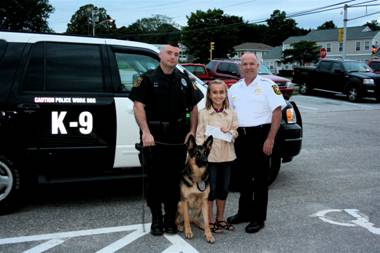 Lastly we would like to mention a special young girl from the Town of Dudley. In the summer of 2010 9 year old Peyton Suprenant contacted Officer Suss by letter asking for permission to try to raise funds. Her mission was to have a summer project which would benefit animals in some way. After researching with her mother, Peyton contacted the Webster Police asking to donate her services to help K9 Red.

After a summer of hard work Young Peyton managed to raise over a couple of hundred dollars for our K9 fund. Her hard work was recognized by the Webster Board of Selectmen and her story was featured in the Worcester Telegram and Gazette.

Young Peyton surprised us again this past summer of 2011. She presented the K9 Unit with another donation of over $200 from her fund raising efforts.